Pastoral Letter from the Presbytery

Dear friends, the last few weeks have been challenging, confronting us with images of devastated landscapes, burnt native animals and birds, destroyed homes, and the bodies of farm stock unable to escape the fire, alongside of pictures and videos of the still-raging flames of fire, leaping high into air, travelling rapidly across the landscape.

We have watched aghast as our screens take us right into the heart of the firestorm, standing with firefighters in the face of unbeatable odds. And we have breathed the air that is saturated with smoke from the fires, smoke that causes us to gasp, cough, and wheeze. It has been a challenging time. 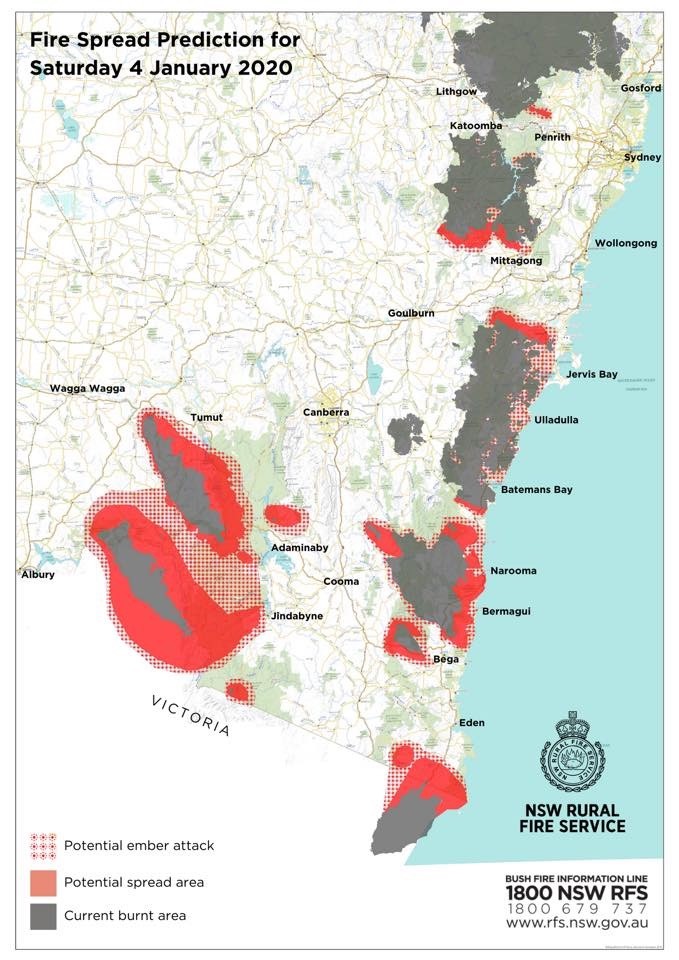 Some of us have seen this kind of destruction at close quarters. Some have memories of the 2003 Canberra fires brought back to prominent attention. Some have been recently in areas that are now devastated or have been caught in the early stages of the recent forefront activity.

Some have family members or good friends who have had to evacuate in the face of the fire. Some of us know people whose properties, animals, and houses have been impacted by the intensity of the blazes. We are all caught into a sense of anxiety and grief as the fires continue.

We need to be mindful of those in all the affected areas, whose homes are gone, whose friends are scattered, whose memories are burnt and whose hopes are scarred. We can pray for them. We can give to the bushfire disaster funds that have been set up to support people on the ground. The Uniting Church has one, as do Red Cross, the Rural Fire Service, and many other charities and agencies.(https://nswact.uca.org.au/about-us/giving/moderators-appeal/) 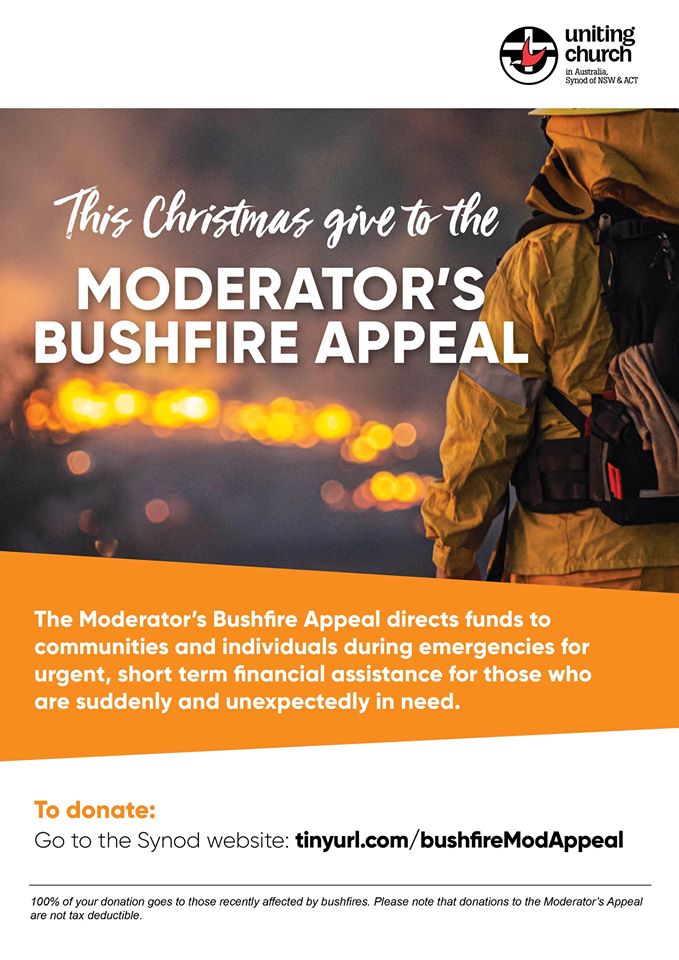 We can pray, especially, for the Disaster Response Chaplains who are on the ground amongst these people—listening, comforting, praying; holding people in their time of grief, offering consolation and providing practical support. These chaplains are trained to work closely on the ground with the emergency services and the local councils in each location.

These chaplains work with the volunteers from local churches and service clubs, who are providing meals, water, and a comforting presence to people in great need. Along with the volunteers they work with, they exemplify the ministry of hospitality, expressed through compassion and practical assistance, that is fundamental to the faith we share.

To assist us with our prayerful support of these people, here is an overview of the ministers, pastors, chaplains, and key lay leaders who have been contributing so effectively to the local disaster responses in each location. Please uphold them as they go about their ministries in each place.

Julie Fletcher has been ministering in Braidwood and working closely with churches and organisations in the town, since the fires broke out there in November. Julie and husband Neil have formed an ecumenical co-operative with other churches and the Moderator’s Bushfire Appeal has already provided funds to assist as they meet the practical needs of people from the areas surrounding the town where the fires have struck. Roads are still closed between Braidwood and the coast. 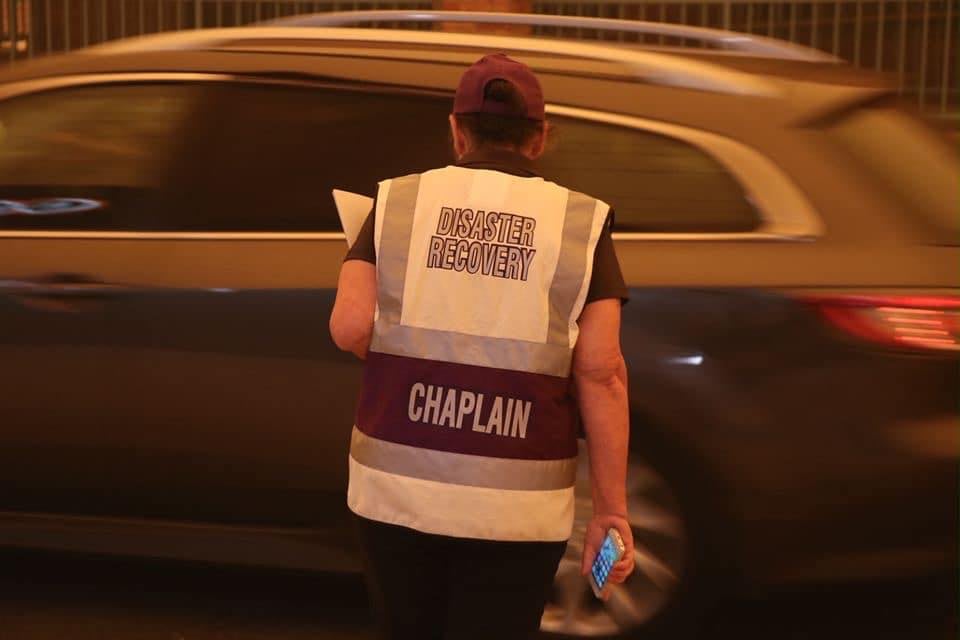 Disaster Recovery Chaplain Susan Cann; serving from Bega up to the Sapphire Coast

David Russell and Susan Cann have been active, first in Bega and then in Merimbula, where David has been in placement for some years. David estimates he has had contact with a thousand people since the Sapphire Club was opened as an evacuation centre. This is the kind of ministry that we can support from distance through our prayers.

Karyl Davison came to the area after the initial damaging impact of the fires had swept through. She has been based at the Merimbula RSL Club, where she has ministered with about 400 people. Ian Diamond travelled to the coast with her and is based at the Tura Beach Country Club, where almost 400 people sheltered; along with about 70 pets! Most evacuation centres do not accept pets, so Ian set about ensuring that people with pets had a safe and secure place to shelter.

Michael Palmer is an Anglican minister serving the Uniting Church in Eden, and with the UCA people, Peter and Pam Skelton, has been working long days and well into the nights to make properties safe, after most of the people in the town were evacuated. The hinterland of Eden is particularly at risk currently. Instead of worship on Sunday, Michael opened his own home to the people still in town and met with people for conversation and prayer, with a cup of tea as well. He also spent some time visiting people who had stayed, praying with them. Some people have been unable to leave the town because they had no fuel and no funds.

Uniting Church ministers Yvonne Stevenson and Kath Merrifield, along with Ray Lemon, from the Assemblies of God, have served at the Batemans Bay evacuation centre. Yvonne, who lives in the area, has been active as a chaplain from the very start of the emergency and has done sterling work in difficult circumstances.

Up to 5,000 people have been fed, sheltered, and comforted in that town. Members of the Batemans Bay congregation cleared the pews so that people could sleep in the church. Some hardy souls were sleeping on the pews, which had been pushed together to form beds! Sunday worship was an informal gathering for prayer and singing over a cup of tea. Power has been cut to Batemans Bay on and off for some days.

Terence Corkin, who lives just out of Moruya, has spent several days at the local evacuation centre, helping people to adjust to their frightening situation. Terence and Julie have had to leave their own property for a time during the past week. He reports that the immediate threat of fire has diminished, but there are many people in the town from scattered communities that have been burnt, with little prospect of returning soon. After a period without power, the electricity is running. A fine layer of ash covers everything. 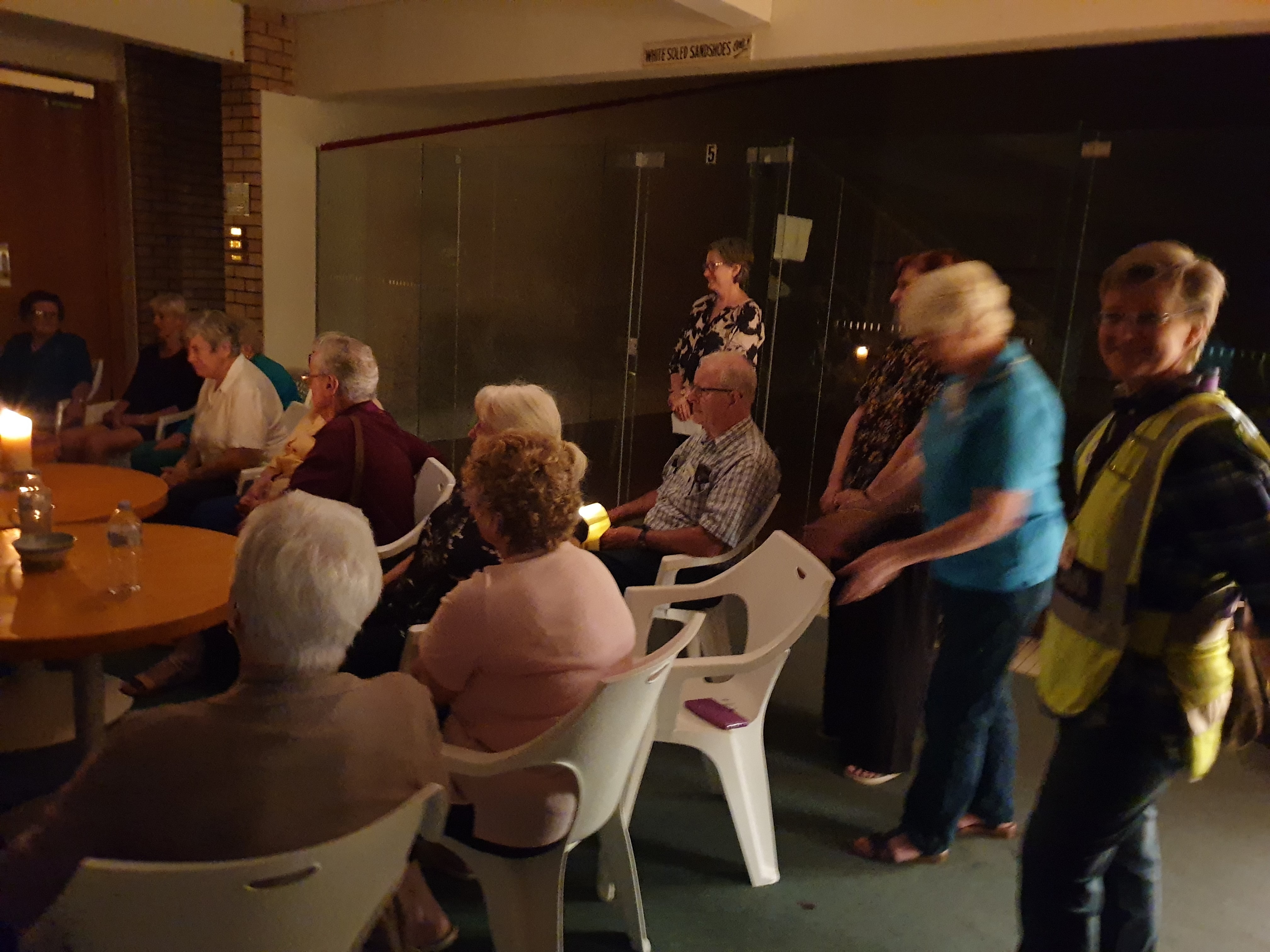 At both Bateman’s Bay and Narooma, several homeless men have been sleeping in swags and old vans in Church carparks. They have become the hands, heart and feet that clean the toilets, wash dishes, clear the gutters and are the protectors of church property and drop-in centres.
Di White and Kath Crapp, in the town of Narooma, have marshalled and organised a great team that has provided food and water, shelter and support, for the many people evacuated into that town. Monty’s Place operates from the Uniting Church building, so there was already a team and the know-how on hand for the emergency. Kath has expressed their gratitude in the knowledge that people are praying for them each day.

Daniel Mossfield has been at the evacuation centre in Goulburn, where people from Bundanoon and other small towns in the Southern Highlands have gathered after being evacuated over the weekend. The evacuation centre is in the Showground, which is filled with people. There are many pets at this centre, and this creates various challenges to those organising the evacuations.

At the tail end of the most recent critical period, the township of Jindabyne became a focus point, as fires in the Snowy Mountains intensified and people were evacuated from right across the Monaro and Snowy Mountains region. The Uniting Church there has a small but very fine group off leaders, including Judy McKinlay, recently elected as Co-Chair of the Presbytery, and Peter Beer. Peter is the Mayor of the region, and thus is involved in the centre of all the planning for the region. It would be very good to pray especially for him, as he serves in that position.

Cooma has also been busy with an official evacuation centre in operation which is now in receipt of DRCN chaplaincy from ADF reserve chaplains. UCA minister in Cooma, Noel Williams, has been at his farm near Adaminaby undertaking the difficult task of fire protecting his farm as it is subjected to ever changing threat levels from two separate fire fronts, whilst also trying to truck in semi-trailer loads of hay to battle the impact from the drought to feed his 1,500 merinos and 50 pigs. Noel’s story will be similar to many within our Presbytery and that of other Presbytery farmers across the NSW and ACT Synod. 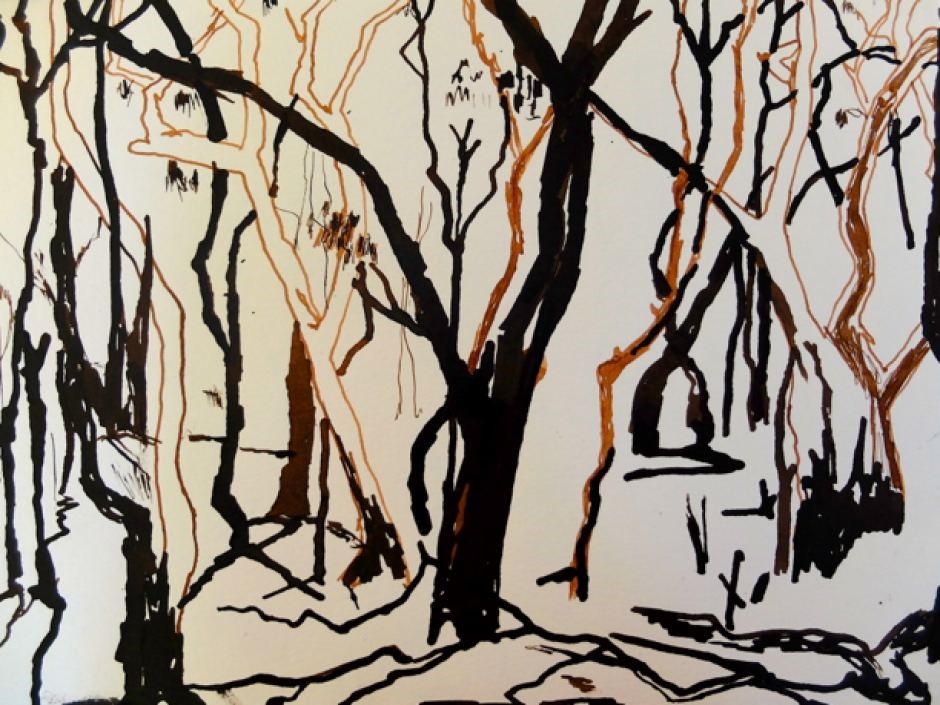 People who have been most impacted have expressed gratitude for the prayer and practical support from others not in the immediate danger zones. We do well to keep praying, and giving, and hoping. And as we pray, and watch, and wait with hope, be encouraged that there are people of Christian faith, people of other faiths, and people of no faith, all working together to ensure the safety of people, animals, and property, and to support one another in this time of need. And know that people are praying around the world for those in crisis.

There is a collection of resources, for prayer and reflection, at https://www.unitingearth.org.au/bushfire-prayers/

The Moderators of each Synod, and the national President of the Uniting Church, have all expressed prayerful concern for the people who are being hardest hit, and for those seeking to serve them. The President’s message is on video at https://vimeo.com/382251990

Personal friends in countries all over the world are, through the wonders of our internet age, receiving up to date information and offering prayers for those affected. The General Secretary of the World Council of Church has assured Australians of the prayers of people from churches across the globe (https://www.oikoumene.org/en/press-centre/news/in-letter-to-australian-churches-wcc-prays-for-respite-from-the-heat-and-the-flames).

The UCA Assembly webpage contains messages of support that have been sent by our partner churches around the world (https://assembly.uca.org.au/resources/disaster/item/424-messages-of-support-from-overseas).

May you go in peace and hope in the days ahead.