Expecting the Unexpected – Stories of God at Work

Telling and hearing stories about a time when you clearly saw God at work in congregations, faith communities and agencies across our Presbytery is going to make for incredibly enriching conversations this Saturday at the first of our Presbytery gatherings as an important kick off to our Presbytery mission planning throughout 2022.
To help encourage you in a story you might tell, here are two stories from our Presbytery. This one is from Pastor Heather Potter in her chaplaincy ministry with Uniting in the Canberra Region South Hub:

I started my day sitting on the balcony of our apartment. As usual I began to pray, inviting God into my day to be a part of all that would happen.
Later in the morning at work one of our residents appeared at my office door. As I invited her in, she began telling me she wanted to talk to me about prayer. I was a little surprised, pleasantly surprised, as she had previously told me she was not a Christian and not particularly religious.

As there were others in the office, I asked her if she would like to talk in the chapel. We sat in silence facing each other for a few moments. I waited. Mary Jo (not her real name) then began to tell me she felt drawn to God, also expressing she wasn’t sure if there was a God. Mary Jo continued by telling me she didn’t know God and wasn’t sure she believed in Him, but still wanted to pray but didn’t know how to.

I listened carefully, giving positive encouragement to help her say all that was immediately on her heart and mind at the time. When she had finished, I began to explain to Mary Jo that there was no formula for prayer, no correct way and no incorrect way. That what might work best for her would be to just talk to God in the same way that she had talked to me. God, unlike people, was always ready to listen and hear her. So, she could just have a conversation with him in the same way that we were having a conversation right then. Our conversation was coming out of a relationship of trust and in the same way she can trust God.

Mary Jo thanked me and asked me if I would pray for her and her family. Her son had passed away very unexpectedly a few months ago. It seemed to me this might have been the prompt drawing her toward God.

After I prayed for her, she thanked me, saying it was a beautiful prayer. Then she left and returned to her room.

A few days later she popped her head into my office again to tell me she was going into the chapel to pray. I simply smiled as she went into the chapel.
When I left my office a bit later I heard her chattering away to God just like she and I had talked a few days earlier. She remained there for about 45 minutes talking to God before leaving to return to her room.

When we ask God into our every-day lives the stories we hear and the experience of stories we are a part of are often unexpected and a surprise.

Paul, in his letter to the Christians in Rome (Romans 8.26), reminds us that it’s not the words we use but the heart we pray with that matters most. In fact there are times when in prayer we are simply lost for words. “In the same way, the Spirit helps us in our weakness. We do not know what we ought to pray for, but the Spirit himself intercedes for us through wordless groans.” 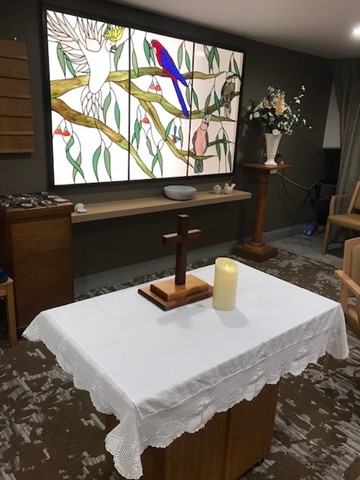 The next story is from Dennis Martin from the student ministry at Canberra City Uniting Church:

A student came in to my office at Toad Hall at the Australian National University. We got talking. He asked me if I could help him with his English. I said “of course” (I am a teacher of many years standing and have a CELTA qualification in teaching English to overseas students). The young man knew I was a chaplain, but we didn’t talk religion.
He had a major English test on the horizon and wanted help with his spoken English. He was an excellent student, conscientious and hard working, highly motivated to improve (a teacher’s dream student!).

When covid restrictions arrived we continued to meet weekly via Zoom – for over a year we engaged with each other, an hour at a time.

Whenever I would ask him “how he was getting on” he would say how his day or week had been. Then he would in turn enquire of me, “How are you getting on?”. He was genuine. He waited for an answer. He cared.
I hadn’t expected this. It was a nice surprise.  When he finally sat his English test (with very good marks) I found I missed our weekly meeting.

End of story? No.

He asked about learning more about Jesus. He now attends our CSU (“Christian Students Uniting”) Bible study. Not by anything intentional I set out to do, I was simply helping him with his English and in the process became a good friend.
But clearly the Holy Spirit was moving as well. I pray my good friend will become a Christian and give thanks that in a small way I could be part of that process.

I look forward to hearing stories from you this Saturday about a time when you clearly saw God at work in congregations, faith communities and agencies across our Presbytery.

The gathering is open for all to attend who are keen to be part of contributing to aspirations for the future life and witness of congregations, faith communities and agencies across our Presbytery as we seek a fuller participation in Christ’s mission in the world.