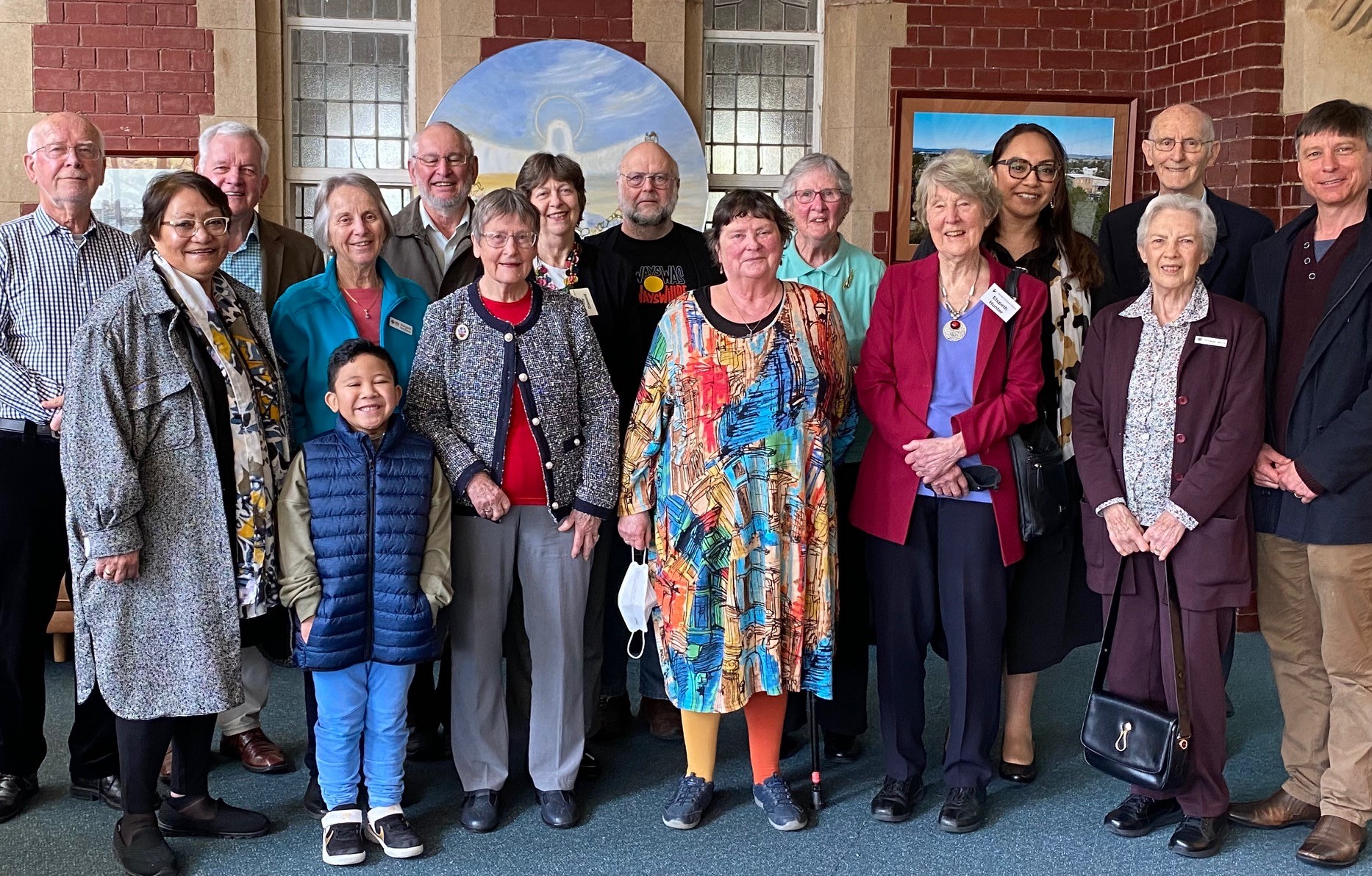 The annual gathering of retired Ministers, spouses, and widows within the Canberra Region Presbytery was held at Wesley Forrest Church on Tuesday 11 October. A group of folks from across the Presbytery gathered for morning coffee and conversation, followed by lunch and still more conversation!

In between the coffee and the lunch, the Rev. Charissa Suli shared with the gathering, speaking about her practice of ministry. Charissa had travelled to Canberra for this gathering with her mother, Kina, and youngest son, Azariah, who also shared in the time with us. Charissa, a second-generation Tongan-Australia, used the Tongan fala as the basis for her reflections on the practice of ministry.

A fala is a woven mat, created for specific purposes within the Tongan society. A large fala is created for community conversations, to provide a generous space for conversations and story-telling (talanoa). A tightly-woven fala is prepared for a marriage—the tight weave signals commitment. A loose-woven fala is created for a funeral—that fala is buried with the body of the deceased, so it need not be made to the same standard as others; but it is made in love, with care.

The fala was traditionally created by unnamed women in the village, commoners who gave sacrificially of their time and talent to create the mat. During the lalanga, the weaving of the mat, the conversation evolves between those doing the weaving. After the mat is completed, it is available for talanoa, the telling of stories, within the community. Although prepared for a specific purpose, every fala can be repurposed for another use, as occasion requires.

The traditional role of the women as the weavers has shifted in more recent years; now, the men of the village are able to join in the lalanga—initially, by invitation of the women, but now, as common practice. It is the weaving of the strands which creates the community, for as the strands are woven, so the stories are shared; as the conversation grows, so the community is strengthened. As those taking part join in the weaving process, they discover that any cultural distinction between them falls away; they are all knit into the weave of the evolving community.

Those sitting on the fala are eligible to, and expected to, participate in the talanoa, joining their voice to the conversation. Even those sitting outside the fala can join in—often, people sitting nearby touch the tala and are joined into the community. The border lines between “on the mat” and “outside” are constantly being redrawn.

Charissa has served as Cross-Cultural Consultant for the Synod, a Minister in a Congregation, a member of the Assembly Resourcing Unit, and now in a Presbytery role with Sydney Presbytery. She will become President of the Assembly for a three-year term, commencing in mid-2024. She reflected with the group on how the fala has provided a potent symbol for her own practice of ministry in each of these varied contexts.

Charissa related the cultural practices associated with the fala, to the story of Jesus, meeting an unnamed woman in Samaria. In the back-and-forth of the dialogue, as Jesus and the woman each speak, then listen, common ground is established between the two (a Galilean man, a Samaritan woman). As Charissa says, “the open space creates an opportunity for transformational change”.

Although Tongan society has historically been strongly hierarchical, a society in which everyone knows their allocated place, the fala is a long-accepted cultural custom that upends this hierarchy; on the mat, there is space for everyone, all at the same level, all in the same conversation. Cultural differences and social status fall to the side as the talanoa continues.

Charissa invited those present to consider how our own practice of ministry might reflect these values. How do we create an open space to provide “opportunity for transformational change” in the places, and amongst the people, where we serve in ministry? How do we discern the way that God is present in the moment of conversation? How might we see that God is weaving together the threads of our own context to enable such a space to emerge?

Charissa concluded by offering us a Tongan saying: "roll out the mat and allow the conversation to proceed". As we left, grateful for the insights and pondering the challenges of what Charissa shared with us, we also left with a sense of optimism and confidence for the future of the church. Please pray for Charissa as she continues to prepare for her term as President; and please prayerfully reflect on the fala as an image that might inform our own practice of ministry.