Out of the Box Missional Conference

Last weekend 14 people from our Presbytery joined on zoom with others from across our Synod and beyond for the “Out of the Box Missional Conference” organised by the Mission Enablement Team of Uniting Mission and Education. The conference was originally planned to be face-to-face at the Centre for Ministry in North Parramatta. However, with the ongoing COVID restrictions in Sydney, the organisers switched it to zoom for the 140 participants. There was some disappointment in not being able to be together in person, and yet the adjustment of the program for it to be all online meant that more people were able to participate, especially for some from our Presbytery. 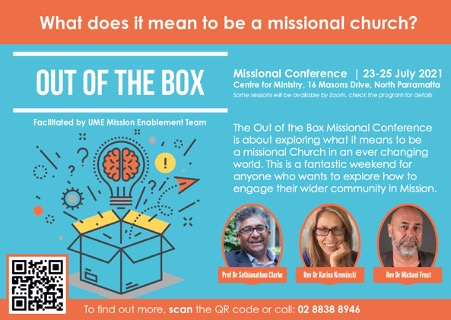 Across Friday night and Saturday, we engaged with 3 keynote speakers: Rev Dr Mike Frost about public tabling as the core of being missional; Prof Dr Sathianathan Clarke about [Com]passionate religious border crossing; and Rev Dr Karina Kerminski about what it looks like to reorient ourselves around the neighbourhood.

Within the conference there was only enough time to choose two electives. Very hard to make those choices with such a great range of presentations. However, all the sessions were recorded. So, there is now the option of accessing the recordings for any of the sessions.

Each of the keynote sessions started and concluded with worship music by different Uniting Church groups. Comments flooded in on the zoom chat from people who greatly appreciated

We listened to this song at the opening keynote session by Mike Frost. It set the tone for Mike helping us understand being missional through the lens of public tabling. He described how the early Christians met around public tables in the same manner as various guilds would meet for feasts. The guild feasts were for people of the same profession, eg the stonemasons guild. They would sit at tables in public, bringing food to share, and their time together would include honouring particular gods through certain rituals. Passers-by would simply move around the group, knowing that this was a gathering for that guild and not for them.

At first glance, the Christians gathering in this manner may have looked like a normal guild. But at second glance, there were differences. Usual guilds were just men, but at the table of Christians there would be men and women. Usually, the guilds were like people (eg professional stonemasons), but the Christian public feasts included slaves and free, and were mixed racially and economically. Any other guild meeting would ignore passers-by. But with the Christian gathering, passers-by were acknowledged, invited in. They would hear about the rituals, have things explained. Offered a whole new way of being human.

Mike asked: what are our church gatherings like compared to this? He urged us that in mission we need to recover elements of these early Christian public tabling feasts. We may not have feast in public like this, but we can shape our gatherings around important principles that we see in these early public feasts.

Mike also used tabling to help us think about the importance in mission of not going into the local community to run something, but going into community looking for what God is already doing, and joining in with God’s mission in the world. Tabling, in particular the central Christian practice of Eucharist or Holy Communion, guides us in discerning what God is doing. We can rely on the Eucharist for this guidance because our faith tells us that God is at work in the Eucharist. Here we learn what God’s work looks like. Mike encouraged us to put on Eucharistic glasses to then find where God is already at work in the world.

Here is some of the work we understand God is doing in Eucharist:

• It is a meal of liberation – linked to Passover.

• It is egalitarian – all welcome, no outcast.

• Shared meal – no one goes hungry. Share our talents and resources.

• It is an eschatological meal – it is an appetiser for what we are yearning for. A tasting plate of God’s reigning love.

With our Eucharistic glasses on, we look into the world to discern God’s work of liberation, for example freedom from domestic violence. We find people working at this and join them. Also, God’s work of inclusion etc. Such a missional approach leads us from being church people to being Kingdom agents. This picks up Sathi’s keynote address on Saturday morning where he makes the point that we don’t need anymore church people. What we need is more Kingdom agents. Sathi also …. I could go on and on.

The Friday night session with Mike Frost was a fantastic start to the conference weekend. I found so much of great value in the keynote sessions and electives I participated in. Well done to UME for organising such a great conference, and being ready to switch it to online so seamlessly.