Reconvened 16th Assembly of the Uniting Church in Australia – Day 2 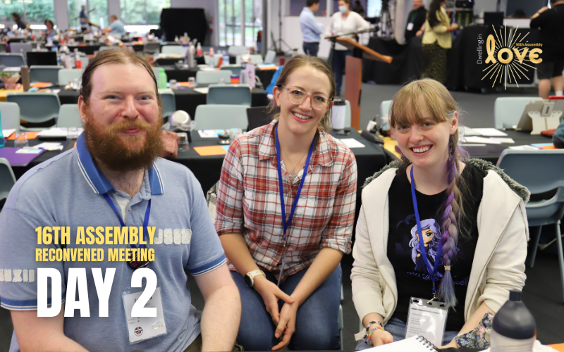 Over the next few weeks there will be bite sized chunks of information about each of the four days of the recently reconvened meeting of the 16th Assembly of the Uniting Church.

The first full business day of the 16th Assembly Reconvened Meeting was filled with listening and discernment with a number of important decisions on continuing witness, climate change, aged care and celebrating deacons in the UCA.

The Day began with worship with a sung Acknowledgment of Country in the language of the Gubbi Gubbi People followed Bible Reflections led by the students of Nungalinya College. A Bible Reflection was led in person by Pastor Kirsty Burgu. A Ngarinyin Worrorra woman, Kirsty is an active artist and the Uniting Church Pastor at Mowanjum in Western Australia.  Kirsty spoke about her painting called the Creation Story, beautifully weaving together the creation stories she has learnt from her ancestors and her Christian faith.

A highlight of the day was the Assembly’s warm reception and adoption of the Continuing Witness proposal which invites the Church to engage with three documents from other churches that will challenge us, encourage us, and offer us wisdom. The documents are:

The Assembly also agreed to adopt a proposal on climate change which commits the Church to take seriously the voices and wisdom of First Peoples on climate justice and care of creation and to call on the Councils and agencies of the Church to join with the Assembly in committing to net zero emissions by 2040.

Another decision of the Assembly both celebrates older people and prioritises advocacy to ensure the dignity and care of older Australians. Under the proposal, Assembly members endorsed UnitingCare Australia to prioritise advocacy that urges the Australian Government to address the growing aged care crisis in Australia. Further the Assembly supported the celebration of an Older Persons Sunday in the Uniting Church each year.

In the evening session Assembly members acknowledged with joy and expressed deep gratitude for the ministry of the diaconate within the Uniting Church in Australia, noting the 30th anniversary of the renewal of this ministry. The proposal emphasised the need for theological colleges to provide specific courses and training for deacons in the Uniting Church within the varied contexts in which they work. After the decision, the President invited Deacons who were present to stand and the whole Assembly prayed over them.

A proposal was discussed and later passed on a Review of the Regulations of the Uniting Church delegating authority to the Assembly Standing Committee (ASC) to immediately review the regulations relating to complaints and discipline.

Another decision was made that allows the ASC to amend regulations in order to reduce the administrative and financial burden on small congregations in relation to auditing processes.

The Assembly meeting also had its first opportunity to engage with the Act2 report and proposals. Act2 is process of discernment about how faithfully following Christ in our time and place shapes the Uniting Church into the future. Catherine Pepper, who is a member of both the Assembly Standing Committee and Act2 Task Group, introduced the report and proposals.
“In the days before the pandemic, the ASC recognised both our calling and the challenges we face as a Church – those things that make it difficult to live out calling in this time and place. Out of this, Act2 was discerned.”
“What began then was a whole-of-church national process to explore the opportunities and challenges that face us. The proposals we bring to this Assembly are the result of a two-year-long period of consultation, reflection and discernment.”

The proposals do not mark the end of the Act2 process but invite the Assembly to affirm a range of things about the identity and vision of the Uniting Church and to mandate a new stage in the process to explore certain directions. This would likely establish a new task group to undertake further extensive consultation across the church with further proposals to return to the 17th Assembly.

Further information about the Assembly meeting can be found at 16th Assembly - Uniting Church Australia, including the documents for the meeting, videos, articles and the Bible Reflections booklet from Nungalinya College.