Reconvened 16th Assembly of the Uniting Church in Australia – Day 3 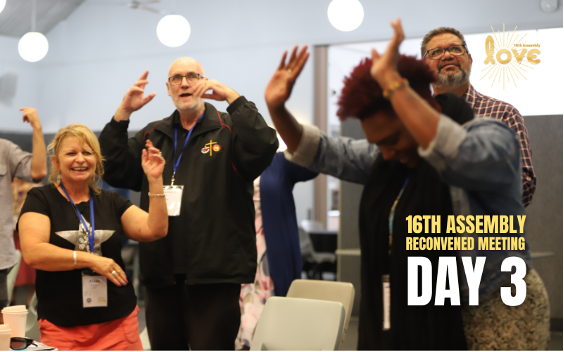 Over the last couple of weeks there have been bite sized chunks of information about the first two days of the recently reconvened meeting of the 16th Assembly of the Uniting Church. Here is some information about Day 3, and next week will cover the final day.

Day 3 of the reconvened Assembly began with members gathering together in song led by the Assembly band, deep reflections and joyful dancing.

Students from Nungalinya College again led us in reflecting on the theme Dwelling in Love with a presentation in person and on video reflecting on John 15 where Jesus says, ‘I am the vine, you are the branches’.

In closed session the Assembly considered proposals about preventing harm from Sexual Orientation & Gender Identity Change Efforts (SOGICE).  The Assembly made decisions to affirm the Uniting Church Statement, Dignity in Humanity, which states that ‘every person is precious and entitled to live with dignity because they are God's children’. It affirmed that prayer and pastoral care are long-held Christian practices that will continue to be offered to support and uphold people, including LGBTIQA+ people, and agreed that these Christian practices should not be used to harm or condemn any people including LGBTIQA+ people. It also recognised that sexual orientation and gender identity change efforts are harmful to people’s mental health and wellbeing and requested the Assembly Standing Committee to develop a process to provide a national resource for congregations, agencies, and individuals to learn how they can help prevent harm from SOGICE ideology and practice.

The 16th Assembly acknowledged all that had been done for the Act2 Project, affirmed its importance and urgency and resolved to continue this work. Looking to the future, it was resolved that the Assembly invite the whole Church including the Synods and UAICC to work together in progressing with further work on Act2 to return to the 17th Assembly.

Further information about the Assembly meeting can be found at 16th Assembly - Uniting Church Australia, including the documents for the meeting, videos, articles and the Bible Reflections booklet from Nungalinya College.