What Australians really think about Jesus and the Church today

Earlier this month, NCLS Research presented a webinar using their research to shed light on “What Australians really think about Jesus and the Church today”.

The data for the webinar came from the 2021 Australian Community Survey by NCLS Research. This survey has been running since 1998, and more recently it has been run annually. The presentation included a particular focus on the results for young adults. Here is a taste of some of the information.

One of the questions asked in the survey was “Within the last five years, have you ever gone to a Christians church and been open to getting involved, but decided not to get involved?”. The responses:

What do Australians really think about Jesus:

From these results, Dr Ruth Powell from NCLS Research concluded that there is a knowledge gap about Jesus and the Christian faith – especially among younger Australians. There is also a low acceptance of orthodox Christian beliefs.

Another set of questions focused on how Australians view religion and religious organisations. Is religion good for society? – 44% yes. Higher than in previous years. 19% disagree. Here is what some young adults had to say in response to this question – 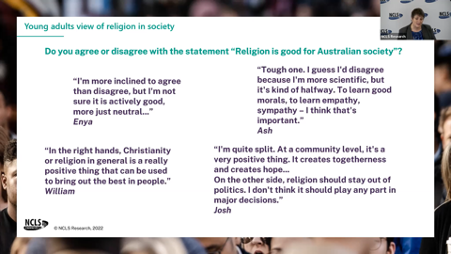 How many Australians would accept invitation to attend church? Three in ten are likely to do so. 16% not sure. Some of the things that would help someone accept an invitation to church are relationship, hospitable, convenient, inclusive, timely (short), social, clear (explain what is going on). Of these, relationship matters much more than anything else. There is a readiness to go if a person felt that it was important to their friend or family member that they accept. However, 56% of Aust think they do not have a close friend or family member who currently attends church regularly.

At the end of her presentation, Dr Ruth Powell provided the following summary: 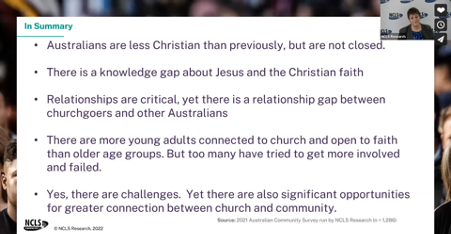 If you’d like to view a recording of the webinar, here is the link: https://www.ncls.org.au/articles/webinar-what-australians-really-think-about-jesus-and-the-church-today/